Many people tend to head to their local body shop to get minor hail damage or small dents removed from their vehicles. This can get very expensive if your car insurance does not cover the repair cost. The good news is small dents and minor hail damage can be taken care of by anyone with even a little mechanical ability. There are many DIY dent pulling kits available online and in auto stores everywhere. If you read this article it will help you find the best dent puller for your needs.

How will we help you find a top of line dent puller? We will start by doing some dent puller reviews of the best models. After that, we will discuss the main components of dent pullers. We will even give you a lot of other useful information on dent pullers too. When you are finished reading, you will then know how to find the exact dent puller that perfectly meets your individual repair needs.

Here are some of the most highly-rated dent pullers you will find online or in the auto marketplace: 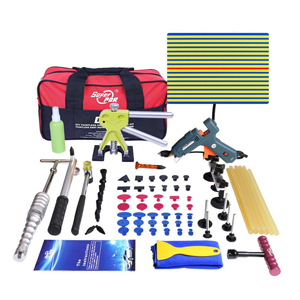 If you are looking for a versatile paintless dent puller you will certainly want to take a look at this product. Super PDR has come up with a 52-piece kit that will give you many options for pulling out small dents. Everything that’s needed to start pulling out dents right away is included. It’s really priced great for all you can do with it too.

This particular kit uses small pads that you securely glue down over the dent (many included). You then grab the pad and pull out the dent using the bridge dent puller, golden dent puller or the other hand pulling devices in the kit. This lifetime warranty kit even includes a glue gun, several sticks of special adhesive glue and a carrying bag.

There is nothing else to buy to get started using this dent pulling kit right away. It even includes the hot glue gun and several glue sticks. Also included are 52 different plastic glue tabs that will help you pull out many different size dents. This kit comes with its own carrying bag too. 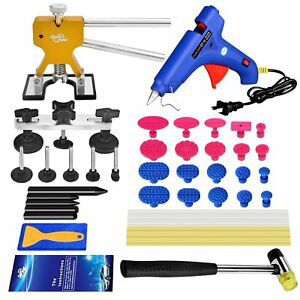 Here is another nice dent removal kit from the reputable manufacturer Super PDR. It too is a fairly versatile dent pulling kit thanks to its 32 working pieces. This dent pulling system uses a combination of glue tabs and several different types of dent pullers to get the job done. There is a golden dent pulling tool and bridge dent puller included right in the kit.

This glue style dent puller also comes with a hot glue gun and several sticks of glue. Also included are a dent leveling hammer, 20 plastic glue tabs, and 6 flattening pens. It’s a dent pulling kit that is suitable to use on cars, refrigerators, washing machines and other items with dented sheet metal. 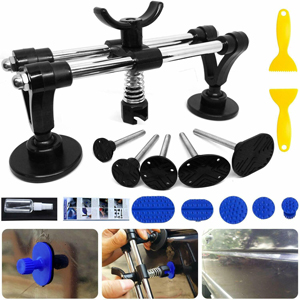 Here is a tool that will allow you to quickly pull out dings and small dents in automobiles. It’s an easy to use 3rd generation bridge style dent puller that works in conjunction with glue tabs. Bridge dent pullers use leverage to slowly and evenly work out dings and dents. No painting has to be done afterward.

Inside the kit, you will also find 10 different sizes of plastic glue tabs, a cleaning cloth, and alcohol. It must be noted that this kit does not come with the required glue gun or glue sticks. Manelord backs your purchase up with a no questions asked 30-day money back guarantee. 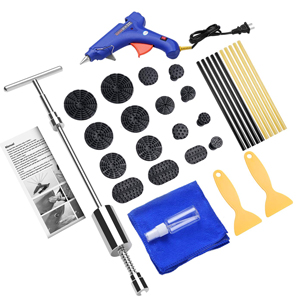 This is a very affordable and easy to use slide hammer style dent puller. It really makes pulling out small dents somewhat effortless on the user’s part. Best of all, it works in a way where no painting needs to be done afterward. You also get everything you need to use it right away in the kit.

The pro-grip slide hammer dent puller is made of durable stainless steel. It also features thicker plastic glue tabs that hold up better when applying dent pulling pressure to them. There are 16 dent pulling tabs in all which allows you to work on several different size dents. The dent puller kit also includes alcohol, cleaning cloth, and scrapers. 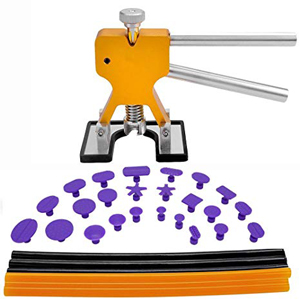 This is a dent pulling kit that uses a very popular golden style dent puller. People like them because they are simple to operate and do not mark your cars body surface as you use them. There also is no need to repaint after pulling out a small dent with this type of dent puller. It’s a great dent pulling kit for the price you will pay for it.

One of the best features about this kit is its wide variety of glue tabs. It has 24 of them at all for many dent pulling choices. Also included in the package are glue sticks but you will have to purchase a glue gun separately. The company backs this product up with a 2-year warranty.

Here are some of the main characteristics of DIY dent pulling kits to focus on when you are shopping for one online or at a store:

The Top 6 Things to Consider When Buying a Dent Puller

Here are some of the reasons to choose or not to choose each type of dent puller. 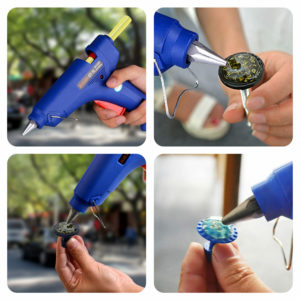 Here are some of the most commonly asked questions that we get regarding DIY dent pulling:

Question: Will drilling a hole in the sheet metal of your car help you pull out a dent easier?

Answer: The answer here is yes. With that being said, I would never recommend anyone who is a non-professional drilling a hole in their vehicle to get a dent out. That’s because if you do this type of dent removal wrong, you can actually make things much worse. The price of the subsequent professional dent repair will go up much higher too.

Question: When is a dent too deep to pull out yourself?

Answer: We look for a few different things before we try to pull out any dent. If your dent has any of the following factors that means it’s best left to a professional to pull out your dent.

Question: Do DIY dent pullers leave a perfect finish where the dent was?

Answer: The answer here is no in most cases. However, if you work slowly and carefully, the area where you pull out the dent will most likely not be visible to anyone who is not a professional bodyworker. This will save you much money too. That’s why DIY dent pulling kits are so popular.

Question: Any tips on the secrets to getting a DIY dent puller to work?

Answer: For the most part you just have to closely follow the manufacturer’s instructions for your particular dent puller. These may be simple tools but they work really well for pulling out small dents if you follow the instructions.

One thing that we all stress a lot here is to prepare your vehicle’s dent area properly. You absolutely have to make sure you clean the surface around the dent so it’s free of dirt, grease, and oils. We also feel you will get better results if you work slowly and pull your dent out just a little at a time.

Check with our homepage to see if you’ve missed anything important!

If you have a small dent in your vehicle, then you can save money by pulling that dent out yourself. The best dent pullers will help you easily accomplish that. They are usually very simple to operate and come with thorough instructions too. Anyone with even slight mechanical ability can use them.