Let’s put this out of our way first: you aren’t here because you enjoy degreasing your car’s engine. Nobody does. None of us, if given a chance, would take up the opportunity of getting under our vehicle’s hood, spoiling our hands with its stinky oil, and come out like a person who hasn’t bathed for a while.

There’s one more thing which we dread with similar intensity: our car’s engine not performing at its best. And engines do suffer a nosedive in their performance if they’re clogged with dirt, dirt, or thousands of other pollutants that daily greet them on the road. Hence the need for the best degreaser.

By helping you get rid of the pollutants in your car’s engine, the degreasers not only improve its performance but also increase its shelf life. Also, as you’d see by going through our engine degreaser reviews, these products make the device easy to maintain as well. 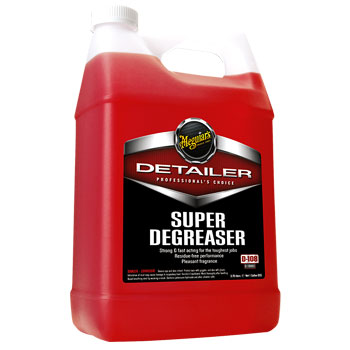 There are three things about this degreaser that force drivers to sit up and take notice. First, its brand name needs no introduction. Those of you who have gone through our other articles know that Meguiar’s is one of the most trusted brand names on the market.

Secondly, the super-powerful formula of this model is one of its unique selling points. It has a unique formulation that empowers this product to remove the toughest of grease. And the best thing about its formulation? It evaporates without leaving behind any residue.
Thirdly, while we’re aware that some of you might not be huge fans of scented degreasers, even then we cannot stop ourselves from waxing lyrical about its pleasant herbal fragrance. Also, since this product comes in a respectable 1 gallon can, you won’t be purchasing another one anytime soon. 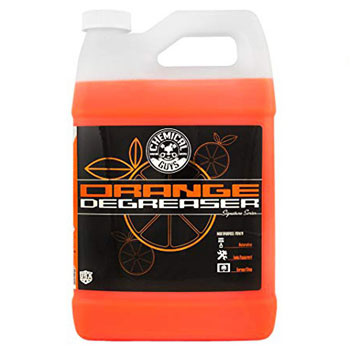 In case you are wondering, no chemicals are responsible for this degreaser’s orange color. Instead, it owes its shade to the citrus solvent which Chemical Guys has used in the product’s formulation. Citrus is a powerful emulsifying agent that is famous for removing dirt, dust and oil stains.

What’s more, citrus has other uses behind its emulsifying action. Since it’s an organic substance, you can safely use it to remove mud, dirt, and grime from rims, undercarriage and even wheels. That’s because it doesn’t have any chemicals which would harm rubber, plastic or other household materials.

The reason why its instruction manual asks you to dilute the product before using it is that this product has a highly concentrated formula. That’s an excellent thing as it means that you’d have to use less product. That, in turn, would allow you to keep on using the same bottle for an extended period.

In contrast to what most people believe, you don’t have to purchase a separate engine cleaner if you’ve already bought a degreaser. The POR-15 Cleaner Degreaser shows you why that’s the case. It not only degreases and removes oil spills and grime but also cleans your engine to give it a sparkling look.

As this product comes inside a spray bottle, you can use it to remove dirt from the tightest of spots. Its manufacturer recommends that if you’re dealing with fine soil, dilute this product with water in the ratio of 10:1. However, if the grime is more stubborn, you can lower down the ratio to 4:1.

Luckily, the fact that it’s highly concentrated doesn’t mean that this product would leave a residue. Instead, within 10-15 minutes of its application, you’d be hard-pressed to find droplets of this degreaser on the outer surface of your engine. 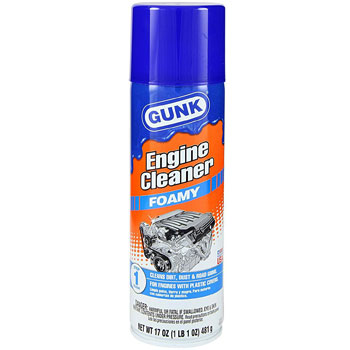 Whether you clean your engine frequently or get under the hood once-in-a-blue-moon, you won’t find this degreaser lacking on any count. It has a foamy action that removes deep-embedded dirt and grime and evaporates without any residue. You don’t need any water to wash it away after application.

Its foam-based formulation equips this product with several benefits. The most important of them is that it’s safe to use on multiple surfaces. You can use this engine cleaner on plastic, under-hood rubber, and even paint. Hence the reason why it’s dubbed as one of the most versatile degreasers out there.

It means that no corners have been cut to keep this product’s asking price low. That being said, there’s one area we’d have liked this model to have done better. It comes in a small (17 oz.) bottle, so you’d have to purchase the replacement sooner. 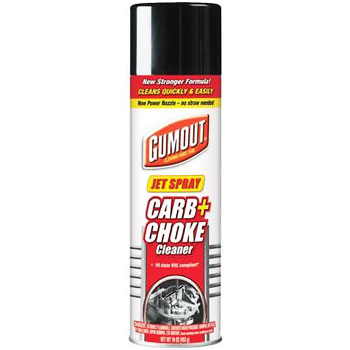 At the cost of sounding pedantic, the Gumout Carb and Choke Cleaner isn’t specifically an engine degreaser. Instead, its primary function is to rid your vehicle’s carburetor off of dirt, grime, oil stains and other pollutants. Engine degreasing, therefore, is the secondary feature of this product.

Does that mean that it won’t do well when used only as an engine degreaser? Nobody said that in this review. The mild-formula of this cleaner, in fact, is a boon for most engines – as it won’t peel off the upper, rubbery surface of the engine while removing dirt and grime.

Having said that, if you want to get the best out of this product, use it both for degreasing and cleaning. This way, it will take care of several problems like hard starting, stalling, and rough idling by cleaning away gum, varnish and dirt buildup from all the unpainted parts under the hood. 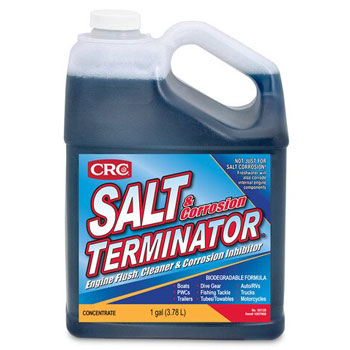 The CRC Salt-Terminator is a 3-in-1 degreaser that performs three functions at the price of one. Its citrus-based formulation allows this product to do what you’d expect from a degreaser. The petroleum solvent inside this product’s formula, meanwhile, will inhibit rust and corrosion.

Then comes its biodegradable formula, which makes this degreaser safe to use. You can apply it on both painted as well as unpainted parts and it won’t do any damage. Just make sure that you dilute this degreaser when using on paint, and you won’t have any reason to worry.

On top of everything else, you’d love to see the protective coating this product will leave behind. That’s because it’s that layer that will prevent the corrosion from returning. So, unless you are very particular about the appearance of your engine, you won’t have any reason to get under the hood anytime soon. 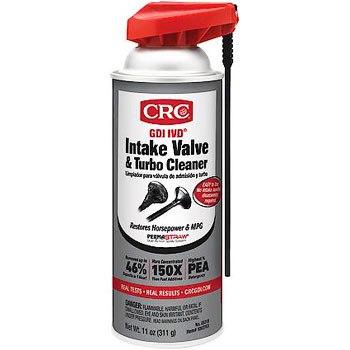 As you might have guessed by now, their same brand-names doesn’t mean that both this and the previous product have the same properties. A mere glance at the intake valve and long nozzle of this product should have been enough to banish such thoughts.

Apart from its design, the formulation of this degreaser is also different from its colleague. We have already stated that the previous product had a relatively mild formulation. This one, however, boasts a potent formula which you shouldn’t take anywhere near a painted surface.

What is an Engine Degreaser?

An engine degreaser removes oil and grease from hard surfaces. Most degreasers contain substances that react with pollutants to cause a chemical reaction. This way, they change the state of the pollutant and make it a cinch to remove with a rinse.

When compared with their industrial counterparts, engine degreasers are relatively mild. That’s mainly because they have to be safe as they come in direct contact with human skin. The absence of toxic chemicals in their formula means they are safe.

Also, in contrast to what their name suggests, the utility of ‘engine’ degreasers isn’t limited to what’s under the hood. Provided they have organic solvents (like citrus) in their formula, you can use these products on rubber, plastic, and even paint.

How does a Degreaser Work?

Regardless of whether they are water- or petroleum-based, most degreasers work on the same principle. Their built-in hydrophobic (water-hating) ingredients react with oils and other grime to dislodge them from the surface by suspending them in an emulsion.

Once that has happened, the pollutants will be wholly suspended in an emulsion. It is a mixture of two liquids which are not soluble in each other. Once the emulsion is visible, you just have to rinse it away to get a clean, dirt-free engine. 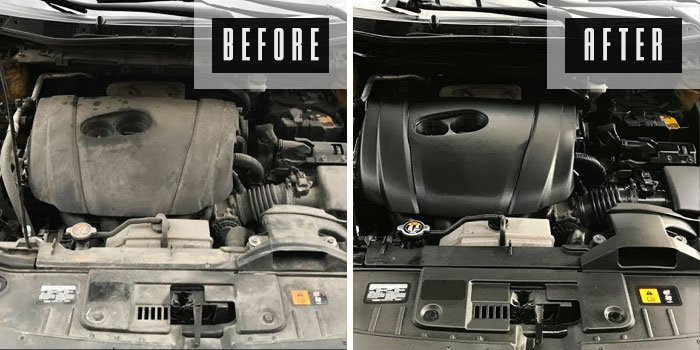 Are you aware that not every degreaser on the market is suitable for your engine? That’s right; some of these products can do more harm than good. Those degreasers which have pure chemicals in their formula can corrode rubber, paint, and sealing valves.

Therefore, when choosing the degreaser for your vehicle’s engine, be cautious. Use the criteria mentioned in this buying guide to select the best (and the safest) product for your needs.

Following are the questions you need to ask yourself before selecting an engine degreaser:

A List of the Most Important Engine Degreaser Features and Specs 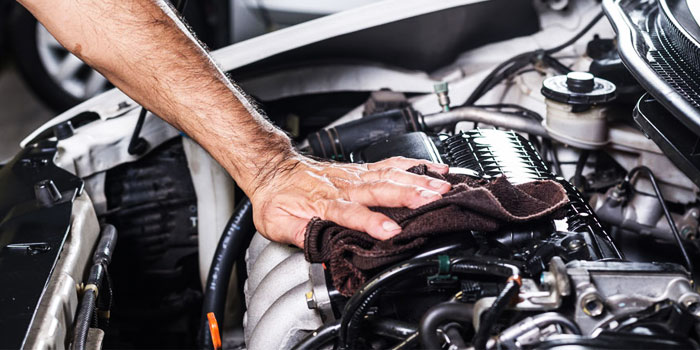 Depending on the type of degreaser, it might have one or more of the following ingredients:

5 Benefits of Using an Engine Degreaser

Following are the benefits you can reap by using an engine degreaser:

Step by Step Guide to Cleaning Your Car Engine

Hoping to impress someone with what’s under the hood? Then follow these simple steps:

How to Clean Your Engine Quickly and Efficiently 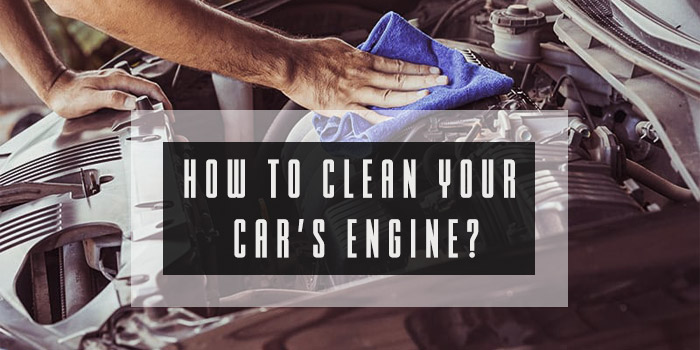 There are many reasons why you might need an engine degreaser. You might be spotting oil droplets on your garage’s floor. The engine’s performance might have gone south. The sight you might be seeing on opening the hood might not be a fairly pleasant one.

Whatever the reason might be, there’s only one solution: the best degreaser. By transforming the look of your engine and adding shine to it, it allows you to pinpoint the sources of leaks. That will enable you to determine the scale of the problem you might be dealing with.

Furthermore, as you can tell by going through our engine degreaser reviews, there are other benefits of these products. Almost all of them offer post-application protection against rust. That means that once you’ve applied them, you won’t have to return under the hood anytime soon.